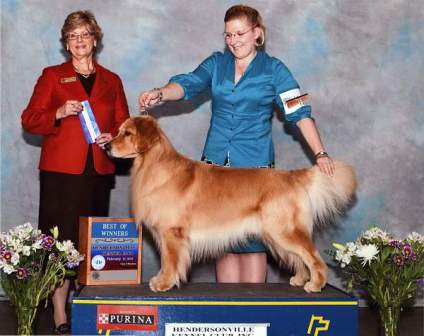 Buzzy is the Best of Winners Greenville, SC February 2010 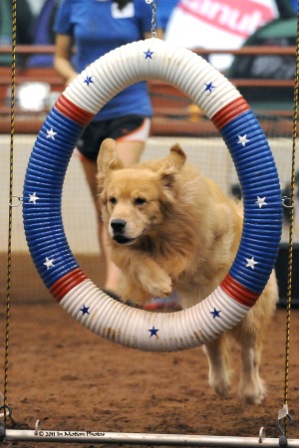 Achievements:
Buzzy will be bred to Lanier’s Saved By An Angel for New Years Day 2013 Puppies. If you are interested in being on the waiting list for a puppy, please email me at marygolddog@bellsouth.net. See the litter page for more information on this litter.

Buzzy is available at stud for approved bitches.

10-27-12 Buzzy got his first qualifying leg in Beginner Novice Obedience.
9-16-12 Buzzy got his Open Agility Preferred title. Now he is playing with the big boys in Excellent Agility. Mary is going to have to run faster.
7-28-12 Buzzy got his title in Novice Rally Obedience at the Greenville Show. On to Novice Obedience.
11-13-11 Buzzy got his Novice Agility Preferred title at the Marietta GA trial. On to Open Agility.
Fall 2011 – Buzzy is working on his Novice Agility Title. Buzzy competed in the GRCA National in Agility, Parade of Champions and Best of Breed. He is now competing in AKC agility.
10-1-11 Buzzy competed in Best of Breed at the GRCA National Specialty and made it until the final cut.
3-13-2010 In 3 weekends out with a handler, Buzzy has finished his Championship and is now Am./Int. CH Amate’ Fly Me To The Moon.
2-6-2010 After his first weekend out with a handler, Buzzy is now major pointed toward his AKC championship. He won Best of Winners in the Atlanta shows over 24 dogs and 27 bitches for a 3 point major.
2nd weekend out with a handler, Buzzy is Best of Winners in Greenville, SC.
3rd weekend out with a handler, Buzzy is now a Champion. He won two other majors on Friday and Saturday in San Antonio, TX with handler, Jane Myers to finish his American Championship.
12-13-09 Buzzy won Best Bred By Exhibitor In Show at the International All Breed Canine Association Show in Atlanta under judges Don Jones and Lenora Riddle, handled by Mary. Buzzy is now International Champion Amate’ Fly Me To The Moon.

Buzzy is a STAR! He was on Lifetime’s show “Drop Dead Diva” on Sunday, July 26 playing David Beckham 2, a clone of a famous dog. Catherine also had a spot appearance as a handler taking a dog to the courtroom. See
http://dogwrangler.blogspot.com/ for comments made by the wrangler about Buzzy’s appearance. See links page for a hotspot link to this blog.

Gallery for Am./Int. CH Amate’ Fly Me To The Moon RN OAP NJP

March 2008 has been a big month for Buzzy. Buzzy is now AKC Championship Pointed due to his win in Hilton Head. He also earned his Therapy Dogs International Certification to follow in the footsteps of Mom and Dad. We are looking forward to the Eastern Regional Golden Retriever Specialty Show in Perry, Georgia (April 13) and the Sandlapper Specialty Show in Camden, SC (April 26-27). We have high hopes for this beautiful boy.